Back to top
Jean Nicod Lectures and Prize

A first award ceremony happened virtually on December 15th 2020. Due to the the disrupted year, the series of four lectures that normally immediately follows the award ceremony will take place in Paris at the Ecole normale supérieure in september 2021.

The conferences will be broadcasted live on the DEC youtube channel.

Natural selection, replicators, and the downstream worlds of mind and society - John Tooby

Presentation of the Jean-Nicod Prize and cocktail after the conference

Over recent decades, many researchers have realized that integrating the evolutionary sciences and information theory with the human sciences can offer a secure foundation out of which to crystalize a more unified and mutually illuminating network of interlocking disciplines. This encompassing framework also offers new directions and some surprising resolutions of long-standing problems in cognitive science and philosophy. The key to this framework lies in the recognition that replication is a physical process that imposes its own proprietary, alternative objective kind of physical order—replicative rather than thermodynamic order. Thus it provides objective frames of reference not susceptible to substantial relativist critiques. Natural selection is the only natural process capable of pushing living organization uphill against entropy, and the only source of this functional order. Hence, replicative order provides the only definition of order appropriate to predicting, explaining, and understanding the functional designs of organisms, including those of their cognitive systems. With a series of examples, we will explore the potential for replicative order to illuminate mind, behavior, and culture.

How the mind works can be illuminated by comparing human cognition to standards of good design specified by a normative theory. But which standards are appropriate for an evolved organism ? What counts as a rational inference or choice for animals like us, whose minds were designed by natural selection ?

Research using normative theories from mathematics and logic painted human cognition as irrational, riddled with errors, biases, and flawed heuristics. Yet natural reasoning systems negotiate the complex natural tasks of their world with a level of operational success far surpassing that of the most sophisticated existing artificial intelligence systems. What is the resolution to this paradox ? From the perspective of evolutionary biology, the problem is not that our thinking is irrational ; it is how psychology has been defining and testing for rationality. With six case studies, we show how this approach can uncover sophisticated cognitive mechanisms, and illustrate the pitfalls of studying the computational systems that produce reasoning without reference to the ancestral problems and environments that selected for their design.

For 4 billion years, not a single one of our direct ancestors has ever failed to reproduce. In a world of randomness and entropy, how is this remotely possible ? Moreover, each developing human mind constructs content that is remarkably rich, unique to that individual, and immensely contingent. How can this be reconciled with the claim that the mind runs according to an evolutionary functional logic, and does not start out as a blank slate ?

Natural selection filters for those propagative designs that reliably develop adaptations—including mental programs—that are prepared to meet ancestrally recurrent aspects of the world that were associated with their respective missions (functions). Our evolved architecture is designed to clothe the individual’s contingent world of tokens (e.g, this person, that reptile) in species-universal garments of evolved meaning (e.g., mother, snake) with the help of situation representations. Situation representations provide the shared “code” between the world (as sender) and the organism (as receiver) necessary for learning to proceed. Human mental content is not fully culturally arbitrary ; our rich heritage of species-typical cognitive adaptations endows humans everywhere with a common suite of interpretive and motivational frames that connect us all.

Cultural differences can arise in surprising ways. All depend on details of our evolved psychology.

Inference, learning, and motivation are regulated by a variety of evolved computational systems, each specialized for a specific domain. Each interprets experience using its own native concepts, generates knowledge that goes beyond the information given, and activates domain-appropriate goals. They influence cultural transmission by making some ideas, feelings, and reactions seem more reasonable, interesting, or memorable than others.

But cultural transmission is not the only route by which cultural differences can arise. Cultural patterns can be evoked, rather than transmitted, when (1) specialized mechanisms are exposed to different environments ; (2) several alternative, cue-activated evolved systems give rise to divergent moral intuitions and motivations ; or (3) a single system is designed to respond nimbly to key cues, shifting behavior immediately ; these shifts can be misattributed to cultural selection of institutions. More powerful and predictive models of cultural evolution will require evolutionary psychology.

HEALTH MEASURES : Conferences will be subject to the following health measures in force : 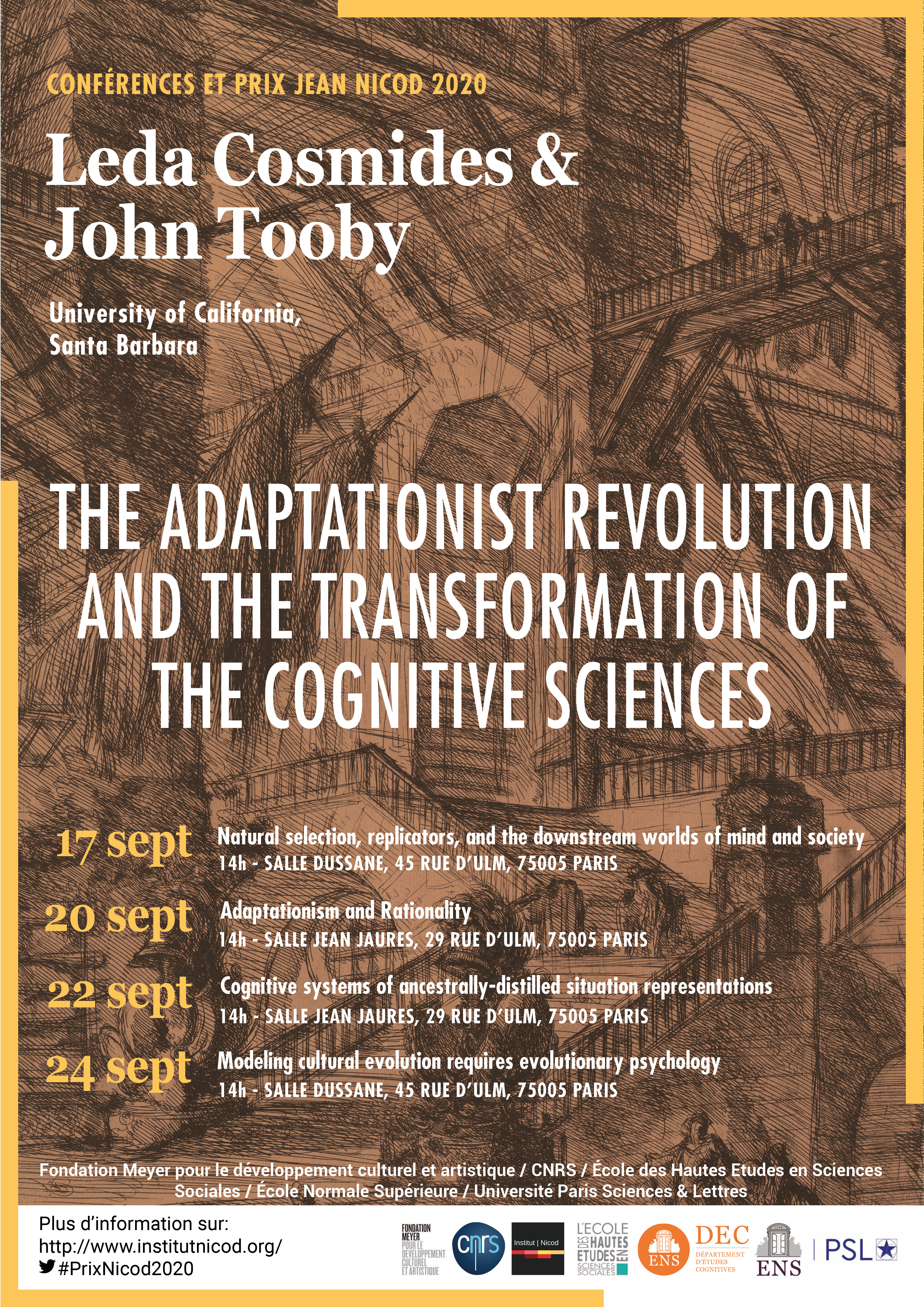